In 2030, a patient will enter a clinic to have his regular check-up. Upon entering the clinic, the receptionist nurse will bring out her phone and ask the patient for a copy of his ID for the ID number. The nurse will just scan the ID using an application she downloaded online for free. She will then put the patient’s ID number in a web portal to obtain vital health data. She will see that the patient is wearing Apple Watch, and she will request if she can transfer the heart beat data, and sleeping record from the watch to her application.

The patient will wait at the Lobby until called. Once called, the Doctor, using her own mobile app, costing 2$ will receive the patient’s records from the receptionists. It now includes the Apple Watch data. She will also view the patient’s past medical history by querying it from an online record repository. This will also contain records from other facilities.

This is the future of digital health. There will be no enterprise Electronic Medical Records (EMRs) or a single monolithic Electronic Health Record (EHR) or Hospital Information System (HIS). Facilities will be using small apps made by startups for each of the workflows. There will be an admission app, a consultation app, and a monitoring app. Data from wearables such as Fitbit or Apple Watch will be available to health providers. Piece-wise health data will be collected and this cannot be done using existing standards such as HL7V2 or HL7 CDA. This requires the use of APIs and the sharing of data from a server. It is envisioned that these workflows would flourish with the adaption of HL7 FHIR.

HL7 V2, V3, CDA, and FHIR are the health data exchange standards that were released by the Health Level 7 (HL7) International group.

Health Level Seven Version 2 (V2) is a purely messaging standard that allows the exchange of clinical data between systems. It is designed to support a central patient care system as well as a more distributed environment where data resides in departmental systems. (Source: HL7 V2 Briefer)

As stated on the official website, the following are the benefits of using V3:

An HL7 V2 message is composed of texts, pipes, and hats.

As stated on the official website, the following are the benefits of adapting V3:

Messages and electronic documents are expressed in XML documents, which is totally different from the v2. The object data are included as sub-data in the XML tags.

The HL7 Version 3 Clinical Document Architecture (CDA) is part of the HL7 V3 with a focus on the actual clinical documents. CDA is a document markup standard that specifies the structure and semantics of “clinical documents” for the purpose of exchange between healthcare providers and patients. It defines a clinical document as having the following six characteristics: 1) Persistence, 2) Stewardship, 3) Potential for authentication, 4) Context, 5) Wholeness and 6) Human readability.

A CDA can contain any type of clinical content but typically would contain Discharge Summary, Imaging Report, Admission & Physical, Pathology Report and/or more. The most popular use is for inter-enterprise information exchange, e.g. US Health Information Exchange (HIE). (Source: HL7 V3 CDA Briefer)

As stated on the official website, the following are the benefits of CDA:

Since it is basically a V3, CDA is based on the XML. 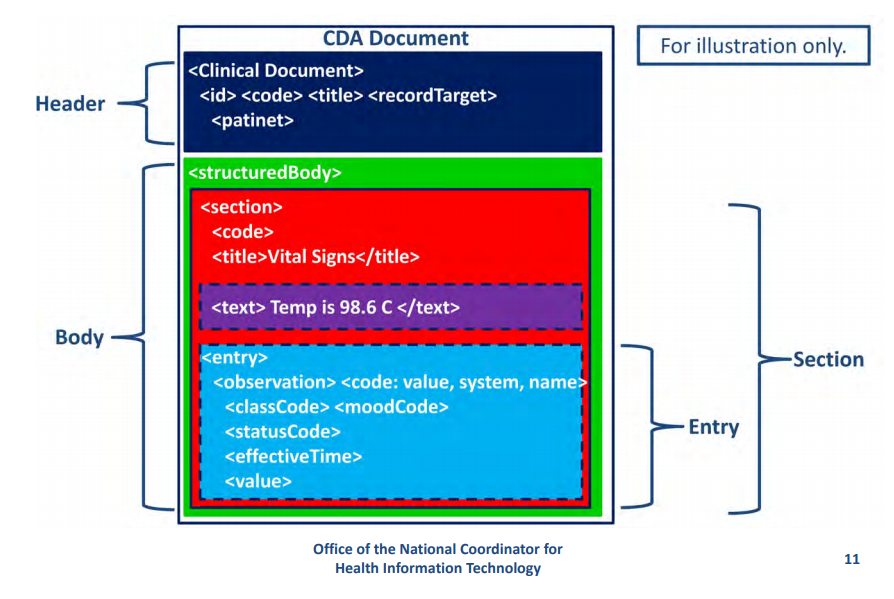 HL7 Fast Healthcare Interoperability Resources (FHIR) standards use RESTful APIs as its data access model. FHIR combines the best features of HL7’s Version 2, Version 3 and CDA product lines while leveraging the latest web standards and applying a tight focus on implementation The building blocks of FHIR is a set of modular components called “Resources”. These resources, since modular, can be pick-and-match depending on one’s needs and be assembled into working systems that solve real-world clinical and administrative problems. FHIR is suitable for use in a wide variety of contexts – mobile phone apps, cloud communications, EHR-based data sharing, server communication in large institutional healthcare providers, and much more. (Source: HL7 FHIR Briefer, HL7 FHIR)

As stated on the official standard briefer, the following are the benefits of FHIR:

FHIR is described as a ‘RESTful’ specification however, it relies on the standardization of resource structures and interfaces. This may be considered a violation of REST principles but is key to ensuring consistent interoperability across diverse systems.

Each “resource type” has the same set of interactions defined that can be used to manage the resources in a highly granular fashion. Transactions are performed directly on the server resource using an HTTP request/response.

An application programming interface (API) is a set of instructions written by a developer and is published publicly for the benefit of other developers. The goal of APIs is to give other developers a common, standard way of accessing data/writing software that communicates with one another.

The API describes the FHIR resources as a set of operations/interactions on resources where individual resource instances are managed in collections by their type. Servers can choose which of these interactions are made available and which resource types they support. The API does not directly address authentication, authorization, and audit collection.

HL7 V2 was originally designed as a message format. It presents a way of how health data can be formatted. EMRs sharing health data just need to follow the format provided by V2 and implement a parser for HL7 V2 messages. HL7 V3 provided structure to HL7 V2 messages. Instead of having a stream of text messages, HL7 V3 messages were written using XML, and follows RIM objects. This eliminates the need to actually parse the data, but instead, a document object model can be adapted. HL7 CDA followed HL7 V3, but instead of being mere messages, it integrated several data objects to form documents. The motivation of HL7 CDA objects are clinical documents.

HL7 FHIR encapsulated the data model of earlier HL7 versions and made use of APIs to allow developers to access the data they need. In HL7 FHIR there is no more need to parse the message or use a document object model. It leaves it to the implementer how it will structure health data (though it has specifications that can be followed) – but rather it only defines how data can be accessed, read or modified. 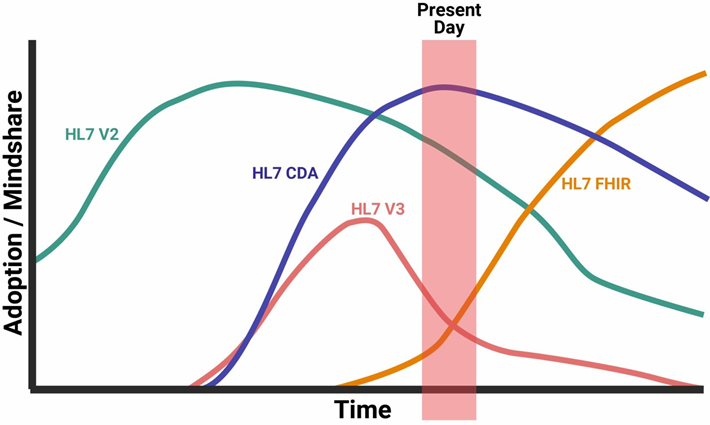 In terms of usage, currently, HL7 CDA is still the leading data exchange standard in the world. It has already surpassed HL7 V2 during the early 2010’s. HL7 FHIR is the leading draft standard, and upon its adoption by countries and corporations, it is projected that FHIR will exceed CDA before 2020. This is accepted since HL7 FHIR has been very useful (most useful) for digital health implementers and developers, as they are the once who first accepted this technology. 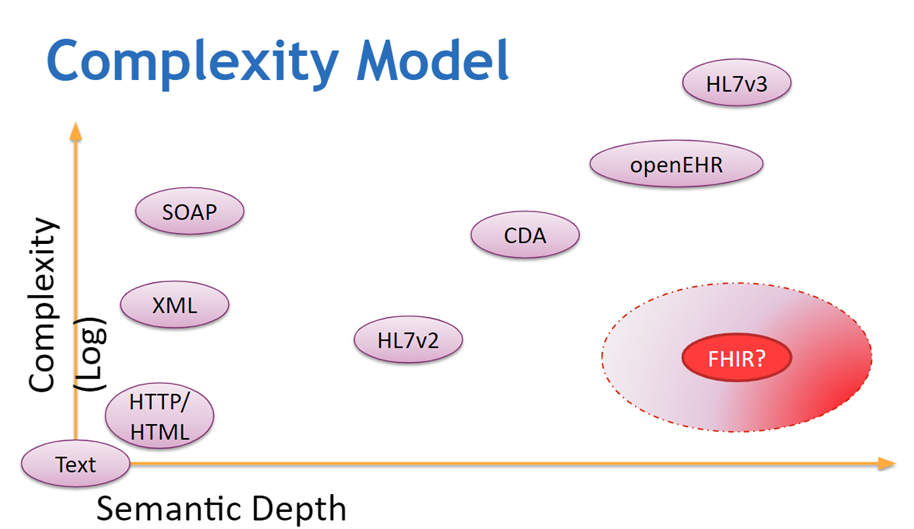 In terms of complexity of use, HL7 FHIR is pretty simple to use since one only needs to invoke (C)reate, (R)ead, (U)pdate and (D)elete to manipulate the FHIR database. No additional operations are needed and there is no need to parse any text (HL7v2) or XML file (CDA). In terms of semantic usage, FHIR provides a reach set of resources, each with its corresponding data files modeling the whole health – care processes. There are a total of 150 resources that models all aspect of health care – from actual patient data to financial-related objects. It is richer than HL7 V2 or HL7 CDA.